For the month of October, I endeavored to read 4 Halloween-themed books and post my inspired recipes. My ambition proved a bit overzealous, so I’m going to have to ask you to suspend your disbelief. Just pretend for a second that this post (and the next one) are still seasonally appropriate.

The month is still October.

Dracula (the real one, aka Vlad the Impaler) was a violently ambitious man. In 1431, Voivode (Romanian for Prince) Vlad was born to a man named  Dracul, a member of the Order of the Dragon. (Or the Order of the Devil, depending on who’s translating.) In 1448, Dracula took the collective throne of Walachia and Transylvania (both part of modern-day Romania), and embarked upon an all-out slaughter fest in the name of Christianity. And revenge against the Ottomans who killed his brother and father. Impaling his enemies and leaving them to die a slow, painful death was Vlad’s preferred method of Ottoman Turk carnage, and Vlad’s battlefield had no boundaries. Once, he purportedly impaled hundreds of banquet guests in his own home because he knew his authority would be challenged. The vicious Voivode still found time to get some ass while he was kicking it, because Prince Charles claims to be the Romanian ruler’s descendant.  Vlad’s endeavors to exert his authority, defend his country, and seek revenge ultimately led to his beheading in 1476.

Bram Stoker’s Dracula, who we see in our mind’s eye as Bella Lugosi, was based on this rancorous ruler. Presented primarily in the form of the characters’ journal entries, the novel is much more engaging than I’ve found most other turn of the 20th century literature. Reading it left me utterly bloodthirsty, and I embarked upon my own ambitious endeavor to obtain fresh animal blood to make czernina (Polish duck blood soup) and homemade blood sausage. After multiple phone calls and personal inquiries to local butcheries (and many disbelieving looks), I had to come to terms with the fact that I was not going to be able to purchase a container of blood. Damn biohazard regulations. I did manage to procure some locally made blood sausage from Two Boroughs Larder that I used in a dish called Impletata, which Jonathan Harker eats in the first few pages of the novel.

“I had for breakfast more paprika, and a sort of porridge of maize flour which they said was “mamaliga,” and egg-plant stuffed with forcemeat, a very excellent dish, which they call “impletata.” (Mem., get recipe for this also.)”

In place of duck blood soup, I decided to make Blood Orange Liqueur filled chocolates and Bloody Marys with Garlic-infused vodka. The latter was disappointingly unpalatable.

“I believe they went to the trouble of putting an extra amount of garlic into our food, and I can’t abide garlic.”

It would prove a useful elixir if you ever really did  need to ward off a vampire. Or a bad date. Otherwise… I would highly advise against the consumption of garlic vodka. 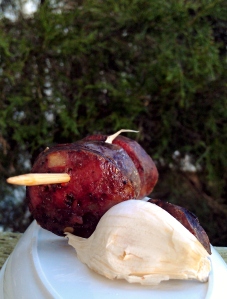 “I never liked garlic before, but tonight it is delightful.”

Despite the lack of REAL blood in any of these recipes, I still invite you to transport yourself to the Carpathian Mountains with Jonathan Harker’s Impletata and vicariously indulge your inner vampire through the consumption of blood sausage and candies that ooze a blood-red filling into your mouth. 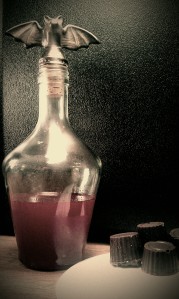 “She wants blood, and blood she must have, or die.” 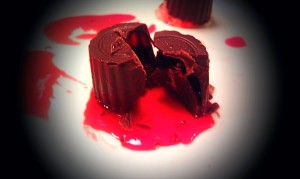 You know, just don’t take it too far.

Blood sausage in Romanian is “sângerete,” and the most common variants come from Transylvania. The sausage adds a lovely sanguinity to this dish. I used prunes because of Jonathan Harker’s references to Slivovitz, the plum brandy of Transylvania, but raisins will work. I used Southern Tier’s Plum Noir porter in the onion confit for the same reason, but red wine is a fine substitute. The beer imparts a bitterness to the confit, which doesn’t taste amazing on its own, but works wonderfully with the sweetness of the prunes.

“The fair girl advanced and bent over me till I could feel the movement of her breath upon me. Sweet it was in one sense, honey sweet, and sent the same tingling through the nerves as her voice, but with a bitter underlying the sweet, a bitter offensiveness, as one smells in blood.”

Slice eggplants in half lengthwise and scoop out the flesh, leaving a lining from the skin 1/4 in. to 1/2 in. thick, leaving 2 eggplant shells. Place shells on a greased baking sheet and roast in oven about 10 minutes, until soft. Chop eggplant flesh into small cubes and set aside.

Meanwhile, cook sausage in a pan. You can either slice the sausage or remove it from the casings and crumble it. I prefer the aesthetics and texture of the larger sausage chunks. Remove sausage from pan. Add 1 t. olive oil to sausage drippings over medium heat, and add garlic. Cook about 1 min until brown and soft. Add chopped eggplant and cook 2-3 minutes, then stir in prunes. Cook about 45 seconds before stirring in onion confit and sausage. Heat thoroughly, and spoon into eggplant halves. Grate parmesan (or other hard, salty cheese) to taste, sprinkle with pine nuts, and serve immediately.

Brown the butter in large pan over medium heat. Add onions, cook 5 minutes until they soften.

Stir in sugar, cook about a minute more. Add thyme, beer or wine, and vinegar. Turn heat to medium-low, and cook uncovered for roughly an hour, until liquid is reduced and syrupy.

“Lucy lay motionless, and did not seem to have strength to speak, so for a while we were all silent. She will die for sheer want of blood to keep the heart’s action as it should be.”

To prepare filling: Grind sugar in a coffee grinder. Place in small pot with blood orange juice and bring to boil. Reduce heat to med-high and simmer strongly until reduced in volume and thick enough to coat a spoon. Measure out 1/2 c. syrup, and stir in the same amount of Cointreau. Use enough food coloring to resemble blood, or to your liking.